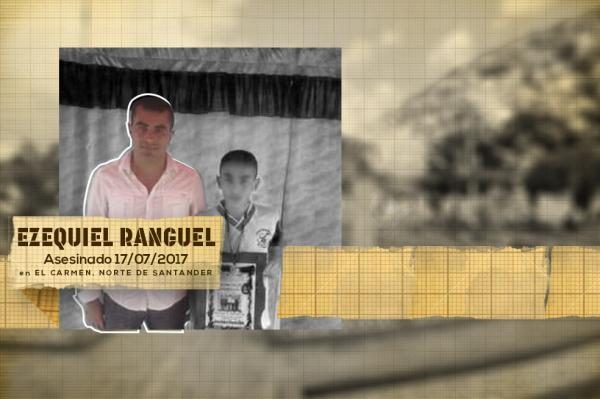 On Wednesday, 19 July, Ezequiel Rangel  was buried in the cemetery in Guamalito, in the Catatumbo region.

Ezequiel  was seen leaving his home around 5pm on Sunday 16 July and later that evening he was seen travelling as a passenger on a motor bike. At 5am the next morning his family received a call telling them that Ezequiel’s body had been found. He had been shot several times.

Ezequiel Rangel was a 35 year old farmer and father of two sons. He had a small farm where he grew coffee, bananas and vegetables. Ezequiel was also the local leader of Asociación Campesina del Catatumbo (Ascamcat) which, in addition to working on issues of rural unemployment and the rights of small farmers, had been active in working to secure the full implementation of the Peace Accords with FARC. This was a particularly sensitive issue in a region which had seen extensive activity by paramilitary groups including the FARC, EPL and the ELN. There had been repeated attempts over the years to smear the members of Ascamcat as having links to the “guerrilla”.

It has been suggested that the killing was linked to programmes, sponsored under point 4 of the Havana Agreement, to replace the growing of coca with legitimate crops. However, this has been disputed by a spokesperson for Ascamcat who said that this programme had not yet started and that Ezequiel has been focused on delivering an education programme about the Peace Accords. While some of Ascamcat’s policy demands may have coincided with some of those espoused by FARC, there is no evidence of any active connection.

According to Ascamcat spokesperson, Pablo Téllez, “Ezequiel Rangel, as a leader,  was someone who was totally committed to securing peace”.