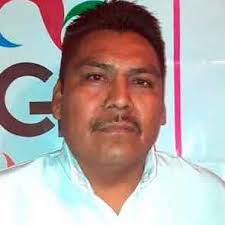 On 20 November 2019, the body of human rights defender Arnulfo Cerón Soriano was found buried under several tons of soil in the “El Aguaje” colony in Tlapa, Guerrero.

Arnulfo Cerón Soriano was a lawyer and human rights defender belonging to the Naua people of the region of La Montaña, Guerrero. As a member of the Popular Front of the Mountain (FPM), he also organised the colonies and communities of the region in the defence of human rights. He had collaborated with the Tlachinollan Mountain Human Rights Center in the past, defending the rights of indigenous peoples. In 2014, he assisted parents in the search for 43 students who disappeared in Iguala, Guerrero.

The search for Arnulfo Cerón Soriano only took place following pressure from human rights organisations and the local population and was not undertaken immediately, as is required by the law on enforced disappearances in Mexico. So far, four people have been detained in connection with the disappearance.

On 11 October 2019, at approximately 8p.m., Arnulfo Cerón Soriano left his home to talk at a conference in the city of Tlapa de Comonfort, Guerrero, where he never arrived. The next day, at around 12pm, his vehicle was found abandoned in the residential area of Magisterio, with the keys still in the ignition. In the days following his disappearance, the human rights defender’s family and colleagues received calls of a threatening nature.

The disappearance and murder of Arnulfo Cerón Soriano takes place in a context of incessant violence against human rights defenders in the state of Guerrero. Front Line Defenders is deeply concerned by the fact that these crimes are seldom prosecuted with Guerrero having one of the highest impunity rates in the country.

Front Line Defenders strongly condemns the disappearance and murder of Arnulfo Cerón Soriano and calls on federal and state authorities to clarify the circumstances of this crime, and to prosecute those responsible.. It also calls on the authorities to take all necessary measure to guarantee the safety of the family and colleagues of Arnulfo Cerón and to ensure that human rights defenders can carry out their work in a safe environment