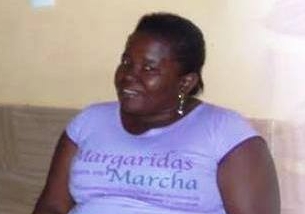 Francisca das Chagas Silva, 34, was strangled, sexually abused and found dead on 02 February 2016, in the city of Miranda do Norte, Maranhão. Francisca was murdered after leaving an event in the local council offices. Her body was found in a puddle of mud, naked with signs of stabbing, strangulation and rape. The murder of Francisca shows the frightening reality of the violence against women in Brazil, especially black and indigenous women.

Francisca was a rural worker from the quilombola village of Joaquim Maria and a leader of the Union of Rural Workers of Miranda do Norte. Francisca, also was an active participant in the Trade Union Study Group (GES Mulher, in portuguese). Francisca who fought for the right of access to land was targeted because of her activity in defence of these rights. Francisca was one of the participants in the “March of the Daisies” (Marcha das Margaridas) that took place in Brasília with the following agenda: “Sustainable Development with Democracy, Justice, Autonomy, Equality and Freedom”.

Soon after the killing, the local representative for Miranda do Norte announced that the investigation into the death of Francisca was under way, seeking to identify the circumstances and perpetrators of the killing. However, more than a year since the murder there has been no progress in the case. UN Rapporteurs have asked for explanations from the Brazilian government about the deaths of nearly 30 human rights activists, including Francisca´s. In February 2017, three months after the deadline given by the UN, the Brazilian government responded only superficially to five of the cases, and nothing was clarified about the murder of Francisca.

Gender component to killing:Evidence of gender-based and/or sexual violence

Organisation:Rural Workers of Miranda do Norte