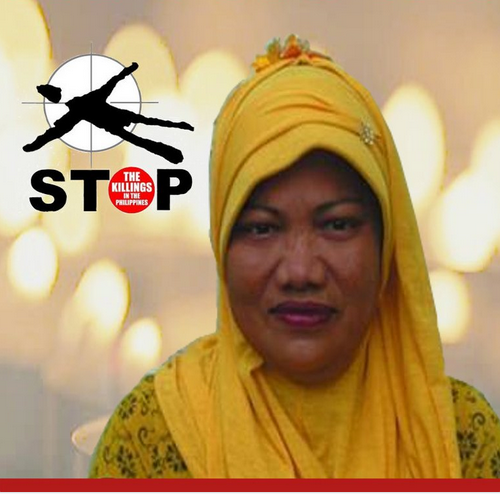 43-year-old Mariam Uy Acob was a paralegal at the Kawagib Moro Human Rights Alliance. She was killed by suspected government troops on 23 September, 2018. Also a leader of Moro evacuee rights group Tindeg Bangsamoro, Mariam consistently denounced aerial bombardment and encampment in Moro communities, notably those perpetrated by the Army’s 40th Infantry Battalion under the 6th Infantry Division, according to Kawagib. The group added that Mariam had been receiving death threats.

Karapatan Alliance for the Advancement of Peoples’ Rights disclosed that two gunmen shot Mariam while she was on board a motorbike on her way home. The HRD sustained seven gunshot wounds on her chest, stomach, shoulder and back.

“Only tyrants and human rights violators stand to gain with the deaths of human rights defenders like Mariam Acob,” Gabriela Women’s Party said. “We will cry for justice as we fight for the lifting of martial rule in Mindanao.”

Cristina Palabay, Karapatan secretary general, condemned what she called as “the military’s handiwork under martial law, mercilessly zeroing in on human rights defenders.”

Karapatan noted that the killing of Acob came weeks after the massacre of seven young men in Patikul, Sulu on September 14, 2018. The victims went to sitio Bato, barangay Kabuntakas to harvest fruits but their bodies were found the next day, riddled with bullets. The Army’s 55th Infantry Battalion claimed in a statement that the seven were members of ISIL’s branch in the Phillippines.

“The government has been directing people to believe, especially under martial law, that Moro communities are the purveyors of terrorism and thus they deserve to be subjected to harassment, air strikes, forced evacuations, and other abuses,” Palabay said. “What are conveniently left in the shadows are the years of oppression, repression and discrimination, and the justified and necessary resistance of Moro communities against continuing State terrorism.”

Based on the report by Butlalat