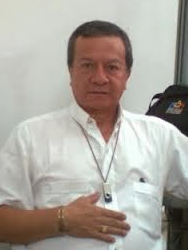 Reinel de Jesús Cano, was shot to death on July the 24th of 2014. He was the President of the Asociación Nacional de Usuarios Campesinos of Virginia and served as well as a Peace Defender.

Before his death, Cano had denounced several cases of corruption in the municipality where he resided, so this is believed to be the reason for his death.

A year after his death, a teenager was found guilty

The Asociación Nacional de Usuarios Campesinos organizes and represents the peasants of Colombia to the government and the community.