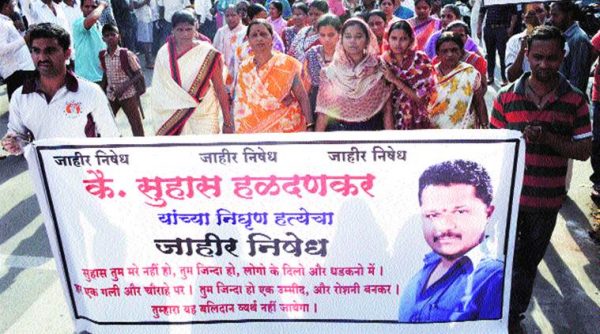 On the evening of Sunday, 8 April, Suhas Haldankar, a RTI (Right to Information) activist, who had exposed several instances of political corruption in the Kharalwadi area of Maharashtra, was brutally murdered.

Haldankar was going home on his motorbike when he was stopped by two of the accused at a cross roads in the Kharalwadi area. They ridiculed Haldankar for a board he had put up recently, highlighting the lack of basic civic amenities in Kharalwadi. A group of 10-12 people then started throwing concrete blocks at Haldankar, who collapsed and died before he could be taken to hospital.

According to media reports, Suhas was highlighting the poor state of the civic administration in his area and had exposed several irregularities in the functioning of the Pimpri-Chinchwad municipal corporation (PCMC). At least one of the accused is said to be a former member of the PCMC and allegedly belongs to the Indian National Congress.

16 RTI activists have been killed in Maharashtra State since 2010, three of them since the present state government came to power in 2014. Condemning the incident, the Commonwealth Human Rights Initiative (CHRI) has sent a complaint to the National Human Rights Commission calling on them to monitor the police investigation as “Suhas was a human rights defender fighting for public causes.” CHRI has also urged the Maharashtra State Information Commission to call for all pending RTI applications filed by Suhas to be made public. The central government has been trying to insist that all RTI applications for information should normally abate on the death of the appellant, which in this case would give a victory to the killers.

Currently, there is no law across India to protect whistleblowers who are victimised for exposing corruption. Parliament approved the Whistleblower Protection Act in 2011 but, instead of implementing it, the central government has pushed regressive amendments that will discourage potential whistleblowers from coming forward.