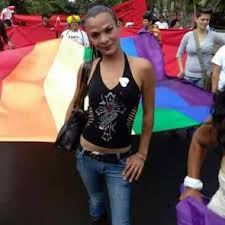 Honduran human rights defender Paola Barraza’s days tragically ended when she was killed in front of her home in Lempira, a neighbourhood of Comayagüela. Her commitment to the cause of LGBTI rights and her involvement with the Asociación Arcoíris contributed to advancing the LGBTI cause in Honduras.

As she answered the door on a Sunday night, in January 2016, her assailant shot her five times in the head and in the chest. Reported to the authorities, the case still does not have any assigned investigator to carry out an investigation or prosecute the perpetrator of the assassination.

As an active advocate for her community, this was not the first time Paola had been attacked for her involvement in the defence of LBGTI rights. She had previously been shot on the 15th of August 2015 by unknown men. She survived the attack despite receiving bullets in her face and being severely injured. These events took place near the office of Asociación Arcoíris (Rainbow Association). Her fellow human rights defenders Angy Ferreira, and Marco Aurelio Lopez were also killed. Angy Ferreira was killed for distributing condoms, and Marco Aurelio Lopez was raped and killed by the military police. According to a recent report by Index on Censorship, 215 members of the LGBTI community have been killed in Honduras since 2009.

In response to these events, the Inter American Commission on Human Rights (IACHR) has strongly condemned the targeted killings of human rights defenders and LGBTI persons. Of particular concern is the fact that state agents have themselves been frequently guilty of assaulting members of the LGBTI community on the basis of their gender identity or sexual orientation.

The Asociación Arcoíris continues to advocate for the rights of the LGBT community, even if some members of the community have lost their lives along the way. As they face structural and systemic discrimination, the challenges remain huge for the LGBTI cause. The Association has been working with the help of the Peace Brigades International (PBI) to empower members of the LGBT community to address issues such as healthcare.

Paola Barraza had been a member of the board of directors of Asociación Arcoíris for approximately 8 years. She was also part of Grupo Muñecas, the Association’s group of trans women.

In the midst of Honduran violence where LGBT people are particularly vulnerable, Paola Barraza is remembered as a symbol, fighting against injustice and persevering in her fight for better acceptance of lesbian, gay, bisexual, and trans people (LGBTI). Her work inspires those who promote equality for all, and advocate for the end of impunity and discrimination against LGBTI people in Central America and beyond.